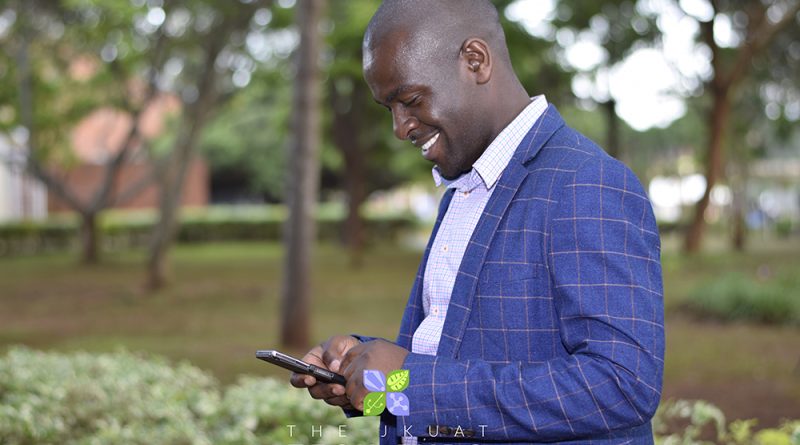 In these times of ours-and we don’t have to be precise about the exact date-but, anyway, some time between the year 2009 and 2010, a young man not much over twenty, slightly tall-maybe five feet plus an inch or two, with ink dark hair and a serious-looking but fairly fine-featured face, approached the JKUAT Deputy Vice Chancellor (Research, Production & Extension Division), Professor Esther Kahangi and proposed an idea. An idea that would seek to revolutionize technology and innovation as we know it. An idea that this far, has succeeded in accomplishing much, much more. This young man, obviously not so young now, is the subject of our Alumni segment this week. Ladies and gentlemen, I present our alumnus of the week, the JKUAT Tech Expo founder and currently the Deputy Director of The Nairobi Industrial and Technology Park, Mr. Calvin Kebati.

I have had the pleasure of interacting with a few great minds from JKUAT. Calvin Kebati is one such alumnus. The first time I bumped into him was at the University main campus in Juja, at the Institute of Energy and Environmental Technology (IEET) building. I think I must have gone into the building to have my student Identity card replaced, some time in 2014. He was at the entrance, having what seemed to be a very interesting intellectual conversation with another gentleman, evidently older, and no pun intended, who looked wiser than him. I would later learn his colleague’s name, one Dr. Suleman Okech, the Director of Nairobi Industrial and Technology Park. A very wise fellow I tell you,  I hope in the future we get to talk about him on this platform and tap into his infinite source of wisdom. Anyway, so this was the first time I bumped into our alumnus of the week. Months after that initial encounter I got to engage Kebati on a magazine project we were running at the University, and that is when I came to appreciate the resilient efforts he had made in collaboration with other players as regards technology and innovation at the University.

It’s needless to reiterate, but just for the sake of being nice I won’t mind this. Jomo Kenyatta University of Agriculture and Technology is a University that draws its pride in being a trendsetter in Higher Education, Research and Innovation. This however doesn’t just happen in a vacuum, and Calvin Kebati is one of the individuals who internalized this tag and devised a means to ensure it remains the reality for generations to come. While still pursuing his degree in Information Technology at the University, Kebati approached the Deputy Vice Chancellor(RPE) Prof. Esther Kahangi with an idea of starting a Tech Expo, a platform that would serve to showcase student innovations, ideas and creations while linking them up with the corporate world. It was a new concept at the time whose success could not be predicted, but the potential prospects were soo attractive that the DVC could not resist. And just like that, a journey with infinite promise and potential in the name of JKUAT Tech Expo began, with the first Expo taking place on Wednesday, 13th October, 2010.

What inspired the idea of Tech Expo?

In my first year in the University I joined JLUG ( JKUAT Linux Users Group) and it’s from there where the idea of the Expo was born. We realized that JKUAT students won in so many competitions that dealt with technology, innovations and other fields. We then asked ourselves how do we come up with such a platform and incorporate the mainstream University in the entire process? Actually first time I suggested the idea of a Tech Expo people laughed it off due to the perceived difficulty of selling it to the University administration, but here we are.

In your words, what can you say Tech Expo is all about?

Tech Expo is a forum where innovators showcase their creativity. It’s a place where people connect; the industry and the public connects with the students to understand what they’re doing. It basically brings these people together to have an informal conversation which in most cases lays the ground for a potential hotbed of opportunities.

What inspires your passion for technology?

I’ve always loved echnology and I remember the first time I touched a computer I was very excited to type and see something on the screen. So I can say I have always had the curiosity to learn more and explore what can be, and not just what already is. I view technology as a facilitator of so many things.

What is the mandate of the NITP and how does it impact on your career path?

Well first I can say Nairobi Industrial and Technology Park is the ultimate hotbed of innovation in Kenya, Africa and beyond. It serves as the incubator of ideas and innovations, a place where they get the much needed wings to fly into the next horizon of opportunities. You see an innovator comes up with the idea, but how do we commercialize it? How do we effectively package it and make it user friendly and with a Kenyan touch? This is the basis upon which the park operates. It definitely fits perfectly within the realms of my career path, which is technology and innovation-related fields.

Finally what philosophy or principle do you live by that you think others should adopt?

First of all I believe everything is achievable with positive efforts and dedication. Other than that I can say the favorite quote I live by is this; ‘If you want to shine like the stars, be willing to burn like the sun’.

Apart from his degree in Information Technology which he completed in 2011, Calvin Kebati also has a Masters Degree to his name in the field of Project Management, which he completed in 2013. Definitely a lot can be attributed to the person of Kebati but perhaps as far as JKUAT community and the country is concerned, his pivotal role in the noble birth of the JKUAT Tech Expo will have a much more resounding effect. The Expo has been taking place annually since its inception in 2010 and has significantly contributed towards strengthening the pillars of the University in areas of research and innovation. The opportunities students have been able to access as a result of this platform, the jobs they have been able to create, and more importantly the optimal solutions they have been able to provide to societal challenges speaks volumes of this great feat.

I once listened to a speaker address some University graduands a while back, one Dr. Frank Njoroge, the Kenyan doctor who discovered the cure of Hepatitis C. His striking message went like ‘…the biggest mistake, unforgivable mistake you can ever make as a human is to come to this world, deplete its little resources then check out without making an impact in whichever small way.’ So wherever you are dear JKUAT alumni, what difference are you making in your own small way? 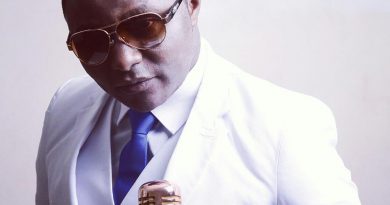 Alumnus of the Week- Gospel Musician Peterson Githinji aka Pitson

May 11, 2016 The Editor Comments Off on Alumnus of the Week- Gospel Musician Peterson Githinji aka Pitson 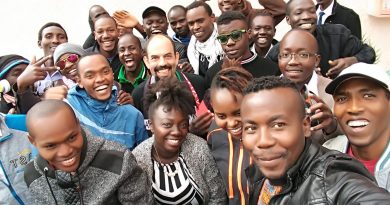 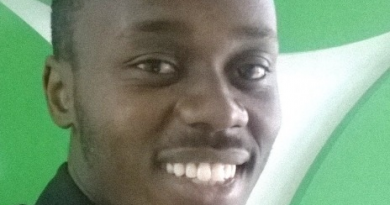 October 5, 2016 The Editor Comments Off on Alumnus of the Week; Network Security Engineer, Sammy Luvinzu

JKUAT  @DiscoverJKUAT
Notice to all students who reside within the University ^LK https://t.co/C2kLE565Rj
21h reply retweet favorite 24 hours ago