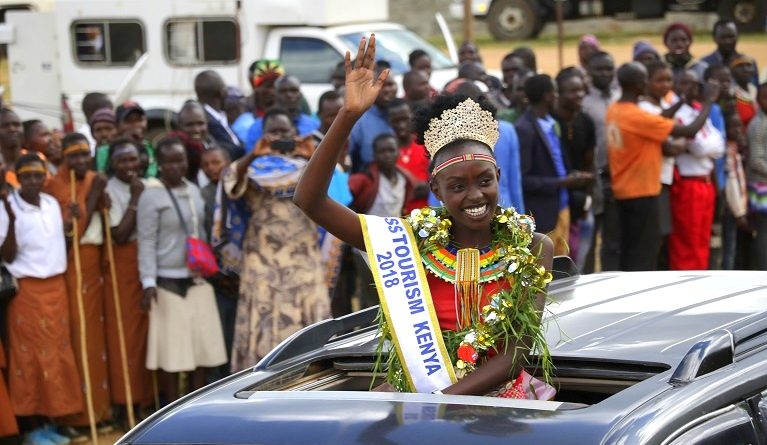 “Ever since I was very young and even up to date, my dad has always told me to be a ‘Chepa muron’, which is to mean the daughter of a Pokot man. I am my father’s daughter. From the traditional stories we’re told, a Pokot lady would stand in the midst of men, and she would stand her ground. A Pokot lady is not weak like it’s usually perceived that women are weak. In our culture women are the strongest. Women are the ones who hold the forte. Being a Chepa muron is being a respectable lady in the society and standing out. Our girls are hard-working and outgoing. Women are groomed to become strong, and we are not easily harassed by anyone. We make our own decisions, and we call our own shots. This does not in any way imply that we don’t respect our men. We respect our men, their views, and position in the society because we know and acknowledge they are our leaders.”

This is the story of Miss. Sarah Chebet Pkyach, of the House of Longolomoi, First of Her Name, First of Her Parents, First of Her Kind, The Authentic Unbleached African Beauty, Kenyan Queen From the Land of Hidden Treasures, The Fearless, Peerless Daughter from the Village of Sangakai, Kacheliba. Protector and Advocate of the Least, the Lost, and the Last. Breaker of Stereotypes and Beacon of Endless Possibilities. The Ultimate Queen of the Forty-Seven Kingdoms (sorry, Counties). The Queen of Wakanda. This is the story of a Chepa Muron, The Daughter of Her Father. A Girl From Kacheliba, West Pokot County.

Growing up in the tiny village of Sangakai, Kacheliba Constituency in West Pokot, Sarah never dreamt of all these. The treble of victories she now bags in her basket of accolades was never part of her grand plan. But as H. L. Dietrich postulates, sometimes our destinies are decided by a cosmic roll of the dice, the winds of the stars, or the vagrant breezes of fortune that blow from the windmills of the gods. When Miss. Sarah Pkyach first contested for the title of Miss. JKUAT 2017/2018, it was purely as a result of a dare from her friends. Even as she walked the runway at the auditions, she never took it seriously. She was just having fun. Then she qualified and proceeded to the finals. She still didn’t take it seriously. She was just having fun after all, and getting new experiences in the process. Then she won. And she wasn’t the only one who couldn’t believe it.

The first person Sarah called to break the good news to was her mother. She speaks so passionately about her parents for being the anchor upon which she proudly stands. Her mother calls her a fighter. Her father says she never ceases to surprise him. But on this day, it was the mother who was surprised. She laughed it off at first, thinking that her first born was playing a prank on her. Then it finally dawned on both of them. Her daughter had almost effortlessly fought her way to the coveted crown at the University.

By the time Sarah’s father, Mr. Ibrahim Longolomoi, was urging her to participate at the Miss. Tourism West Pokot County, she had long shelved her modelling voyage and postponed it for after finishing her studies. And even when she agreed to travel home to participate at the auditions, she simply did it out of respect for her dad.

“Participating at the Mr. and Miss JKUAT and later Miss University Kenya had taken so much of my study time. As you know JKUAT is very rigorous in terms of academics, and the course I take, Biostatistics, is also no walk in the park. So I had told my parents that I would put modelling aside till after graduation. But from nowhere my dad called me and really persuaded me to go audition for Miss Tourism West Pokot County. He had so much faith in me and was so passionate about it, and I just couldn’t say no.”

And so off she went to the land of hidden treasures, and by the time she was leaving back for Nairobi, she was carrying the hopes of an entire county on her shoulders. She was now Miss Tourism West Pokot County. And as fate would have it, when she went back home yet again, it was as a homecoming for the Queen of Pokotland who had just conquered the whole country and crowned Miss. Tourism Kenya. In less than two weeks’ time, the dispenser of authentic smiles, the humble, beautiful and intelligent Sarah Chebet sets out for Kuala Lumpur, Malaysia, to represent Kenya. What began as a dare by her friends in JKUAT has seen her ascend the steps of greatness, radically alter perceptions about her beloved County of West Pokot, give countless girls a reason to believe in themselves, and reinforce the very meaning of ‘Nothing is Impossible’.

At this point in time I can’t help but wonder what kind of friends I’ve been keeping. All this time, all I needed was a dare, just one dare could have been an impetus to greatness. And to you, what do your friends do to contribute to your growth? Nothing? Good, tuko pamoja. Let’s get rid of them.

Heavy is the head that wears the crown they say. Sarah’s life as she knew it has drastically changed. The previously introverted girl who just wanted to privately live her life, hang out with her friends and voyage through life unperturbed now has a national responsibility. It’s a responsibility she recognizes as tasking, but one she is proudly prepared to undertake head on and give her best shot. I’ll now let her talk to you verbatim.

How has it been so far?

Being Miss Tourism Kenya has been both a very exciting and adventurous experience, and also overwhelming and challenging journey. I have come to learn that there’s so much more to a crown than just being a queen or just being beautiful. It’s about being an example to someone, it’s about setting a pace to be followed.

How much has changed. Do you recognize you anymore?

My life has really changed. I am more keen on my dressing. A while back I would just wear jeans and a t-shirt, but I can’t do that anymore. I thought I could hide, have a little privacy, walk around with friends and be me, but even in town I just hear someone shouting my name. My life is not just mine alone, and every time I step out, I’m stepping out to go meet the world and I have to look the part. It doesn’t matter if I have a bad day or not.

How do you deal with the overwhelming attention?

You know the crown might sit on your head and you start being arrogant. I choose to be humble, kind and friendly. I choose to maintain my humanity and personality. Being the authentic me is what I believe keeps me afloat. The moment you try to become someone else, everything falls apart. So I don’t let it go to my head, and I don’t think of it as attention. I look at myself as blossoming, and I appreciate the journey. I appreciate the process.

What are your plans academically speaking?

I’ve been having sleepless nights about my studies. I’m glad I have a really supportive team. My parents always tell me to never quit and keep pushing forward. I’m also glad that my management at the Miss Tourism Kenya puts my education first. I’ll do this Miss Tourism International in Malaysia, then come back next year to finalize my last year of studies.

Did you always want to study Biostatistics?

Not really. I really wanted to pursue Medicine with all my heart. I have been a very ambitious girl. My goal has always been to do Epidemiology. With a B+, I didn’t qualify for Medicine, so I settled for Biostatistics which is close to Medicine. Ultimately though, I also plan to study Medicine. I have watched people suffer from diseases, and lacking the money or resources to get help, and I want to change that. My parents are medics, and this played a part in what I wanted to do. I look up to them, I really admire them.

How does it feel to be the silver lining from an otherwise clouded West Pokot?

This is my greatest achievement in life, and I’m so proud of myself for that. Going back home and meeting someone who just stops to tell me thank you, because now they can stand confidently and say they are a Pokot woman and people get to recognize that. I feel good about this achievement and I don’t plan on making it go to waste.

To those with a negative perception of West Pokot, what do you have to tell them?

West Pokot is a very beautiful place. Just mainly misunderstood because we’re unfortunate to face some difficult circumstances. It is a semi-arid place so we have problems with hunger and drought. We’re also a pastoralist community, mostly associated with poverty because people do not have enough access to social amenities. But all that notwithstanding, the Pokot people are so nice and hospitable. You go to West Pokot and you won’t lack food, and it’s secure. We have one of the lowest homicide cases in the country. Of course there is the issue of clashes with neighboring communities which has been there since time immemorial, but our leaders are doing their best to bring an end to that. The Governor for instance, Prof. John Lonyangapuo, has invested together with other leaders, in building peace schools on all the borders of the County.

They serve to integrate children from all the communities, and part of the curriculum entails training them to live in harmony and to live in peace. If the older generation is already corrupted, then it only makes sense to start from the kids to bring forth a new peaceful generation. I have so much high hopes about my county because I know in five years to come it won’t be the same. I am happy to become an instrument of that change.

Stay tuned for Part Two of Sarah’s story, even as she hands over her very first title of Miss JKUAT 2017/2018 this Friday, 16th November, 2018 at the Mr. and Miss JKUAT 2018/2019 finals taking place at the University. In this next part, she demystifies misconceptions about modelling, passionately talks about her plans with the crown, both for county and country, opens up about her upbringing and how it made her who she is, her journey to recognizing her kind of beauty, being part of that maiden flight to New York, and why you should never fake it till you make it. And of course she still speaks of West Pokot, land she loves. 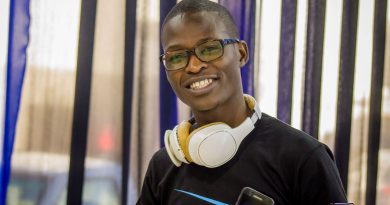 May 18, 2016 The Editor Comments Off on Alumnus of the Week; Samsung Experience Stores Manager, Dennis Makori 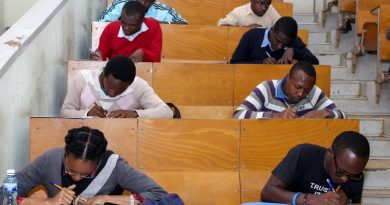 What University-Industry Partnerships mean to Students

June 28, 2016 The Editor Comments Off on What University-Industry Partnerships mean to Students 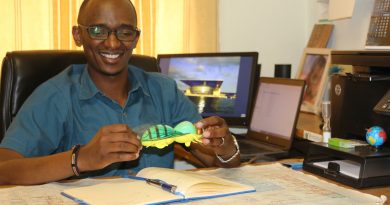 Personality of the Year; The Insect Hunter, Dr. John Kinyuru

4 thoughts on “The Girl From Kacheliba, West Pokot. (Part One)”