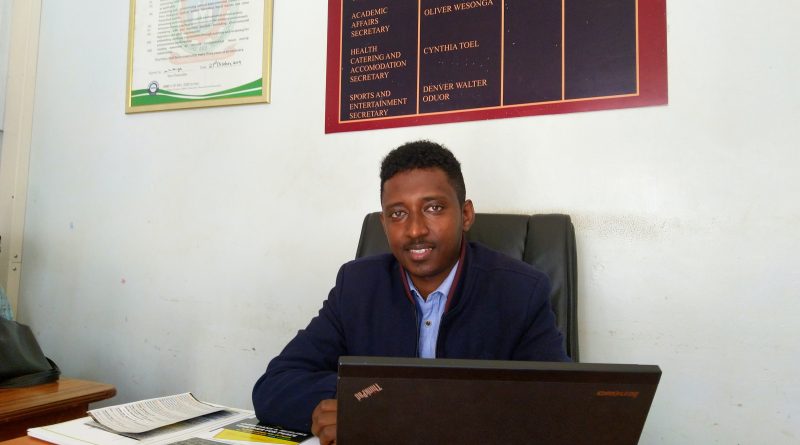 Between his cool composure and simple demeanor, Mr. Ibrahim Boru Shalle definitely qualifies as being deceptively harmless. I mean how else do you explain ascending from being just a student, to being elected JKUSA Finance Secretary, to finally ascending to the top position in the student governing body as the Chairperson, and unopposed for that matter! Or maybe he’s just an astute leader, a skilled tactician and master strategist? Maybe he’s just a lucky politician. Or maybe luck has nothing to do with it. Maybe he’s always prepared, and thus fortunate. Fortune favors the prepared after all. Maybe. You decide. But what better way to learn a man than to hear from the man. So we sat down and talked.

Perhaps we should start with an incident that made many mean people, like yourself maybe, look the direction of this young man. Sometime in early August, Mr. Ibrahim Boru, better known as Ibra, got caught up in a linguistic controversy as he was speaking to the members of the press regarding the unfortunate passing of a student. Now, for those who didn’t watch the clip, here’s the brief I concluded after conducting this interview. The JKUSA Chair was speaking to the press regarding the sad demise of a comrade. He was overcome by emotions as a result, and his eloquence got the better part of him. Then some mean people of the Internet, in total disregard to the grave matter at hand, decided to doctor the clip to massage their deflated esteems and suit their dark definition of comedy. Si hiyo ni krimino? There, now you have the whole story.

Back to serious business. A passionate environmentalist, Mr. Ibrahim is a third year student pursuing Bachelor of Science in Environmental Science, and is part of the pioneer class taking the programme in the University. But it did not start there. His academic voyage to this destination traces back to right after High School. He undertook CPA studies up to level 2, then proceeded to the Kenya Wildlife Service Training Institute to pursue a Diploma in Environmental Management, which he studied for three years. Having passed with distinction, he was offered two choices; get an employment or a scholarship to kick-start further Education. He settled for the latter. Wise boy.

His choice of University was narrowed to two; JKUAT and KU, and Lord I’d love to write why he settled for JKUAT over KU, but there’s no way of doing that without being not so nice to the other university, so I’ll just let him say it himself. That way, I can’t be blamed for anything. So, why settle to be in a pioneering class over another University which had been offering the programme for years?

“Actually I was initially supposed to go to KU because of that very reason, but when I comparatively looked at the programme content and units, I found the JKUAT option more comprehensive and diverse. It was a no brainer from there since I wanted to widen my skill base as much as possible.”

And no, we didn’t just only speak about the man. We spoke about the running of JKUSA as well. What he hopes the Students Association will accomplish in his time, and what his key priorities are. 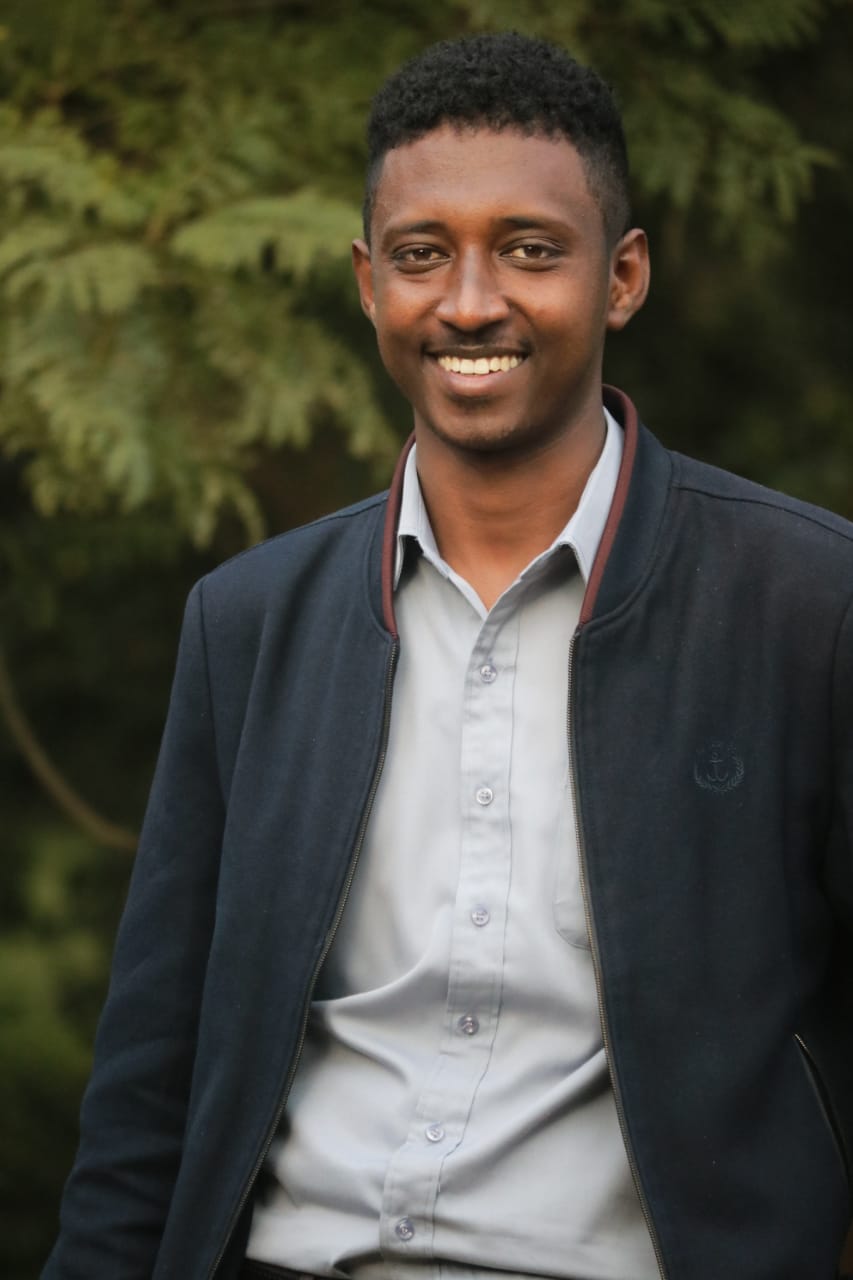 Why did you run for the top position in student leadership?

Most students perceive student leadership as a venture for personal interests with total disregard to the plight of the students. I wanted to change this narrative, and the mindset of students about leaders, and the only way to do that is by focusing on development projects centered on students’ welfare, rather than just events geared at putting money in the pockets of leaders.

How did your tenure as the Finance Secretary live up to this?

When I was the Finance Secretary I was focused on development projects rather than events, I only did one event, which is the policy, when most leaders used did two or four events in a semester. I championed for the facelift and reconstruction of the Student’s Center, and the appreciating of class representatives through some small stipend.

You had already served a term as Finance Secretary. Why the need to be in the new council, and in a higher position?

That’s simple really. One year is a very short time to serve over 40,000 students, and taking note that last year, through to early this year, we’ve been through strikes, and disruptions due to elections. We were in office for less than 9 months. I was therefore unable to achieve what I had laid out in my manifesto, and that’s why am here.

What are your key priorities?

As the JKUSA Chairman, my top agenda is Security, Health Services, and any other issue or activity that touches a comrade’s life.

What is JKUSA’s plan on the security issue?

I’m really concerned about security inside and also outside the school premises. As the Students Council, we are planning to have enough lighting within the university premises and that plan is underway. Catered for in our budget. We are going to identify the areas and walkways which are dark and put the lighting system in place.

What’s the timeline for that?

It is quite a process and our target is that by February next year we should have a proper lighting system in place.

What would you like to be improved in the Health aspect?

You mentioned about the facelift of the Students’ Center, when is that going to be completed?

We targeted to end on September this year but due to issues of University staff strike and long procurement procedures, we pushed that to February next year. My commitment to comrades is that by end of February the project will be completely done.

Back to the security issue, a lot has been said but little action has been taken. What is your leadership hoping to do differently?

First security starts with an individual, we want to educate students about personal security, and we will have a program to engage students on security. We also have a plan of engaging landlords outside the University to increase security guards within their premises as well as lighting.

If at the end of your term you don’t get to accomplish everything, what one thing do you hope makes the list?

The Security and the aspect of better health services to the students. Those are irreducible minimums.

What do you hope for student leadership even long after you’re gone?

That students will elect leaders who will be able to lead with integrity and use their money wisely and in the right way. I hope leaders will rid themselves of the mentality of only improving their lives as the plight of students who entrust them with the positions get toast to the dogs.

Your message to the new students?

First I welcome them to this great university, and I would like to tell them that this University is a place of endless possibilities, depending on how you play your cards. Focus on your education, exploit and nurture your talents and make and nurture good friendships. Learn how to live with others.

What do you consider your purpose in life, and what do you hope to do after JKUAT?

My purpose is public service, and that’s what I hope to continue doing even after University; serving the people.

Say something to those who still call us Juja boys?

First, I forgive them. Secondly, I want to tell them that the JKUAT they knew in the 90s is not the same JKUAT in 2018. You see, we were called Juja boys because the University mainly offered Engineering, Agriculture and Technology and Science-leaning programmes. But a lot has changed, and these programmes that were initially misconceived as a man’s territory is not the same anymore. Ladies have proved that STEM is not a barrier anymore, and I can confidently confirm that JKUAT is a hotbed of intelligent, visionary young men and women in equal measure.

Your hope for student leadership across the country?

I hope for a time when University students or student leadership will not be associated with rowdiness or violence. This is why I’m part of an initiative aimed at achieving just that. ‘Luminous Movement’ is a non-violence movement aimed at addressing student issues in a sober manner, bringing students from all universities together to engage, listen to their grievances in a civil and procedural way. At the end of the day, we’ll all join the corporate world and hope to serve the society you know. Setting a precedence of rowdiness, unruliness or violence doesn’t help our prospects in that regard. So the future is luminous! 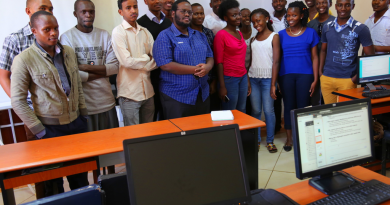 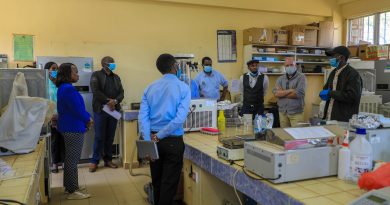